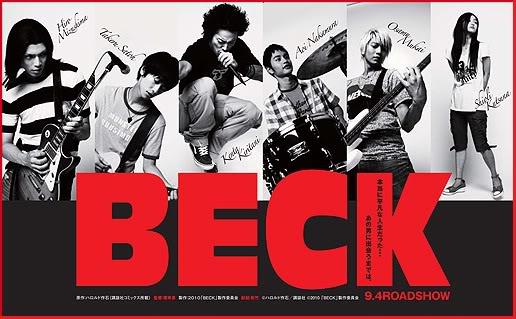 Oooh, the excitement, drama and chaos that goes along with being in a band. There’s nothing more cyclical. Throw together five people with different backgrounds, life philosophies and ambitions up against stiff competition with a rival band, and you’ve got a recipe for either promise or disaster. That’s what “BECK”, originally a popular manga and now a 2010 movie made in Japanese is all about. No, I’m not talking about the eccentric, pasty solo artist famous for the hit 90s song “Loser” or the English artist with the same surname. I’m talking about BECK, the band featured in this movie which was named after the lead guitarist’s dog.

Besides boasting a winning and talented cast, this film has music that would make any rock music enthusiast (such as I!) who grew up in the 90s nostalgic, with its constant injection of famous guitar riffs and samples from some of the most popular rock songs in American and English music history. This film also manages to pay homage to blues music, the forefather of rock ‘n’ roll, in its own way (if you are familiar with American blues/rock ‘n’ roll history, you’ll be able to identify origin of the name of the lead guitarist’s guitar). BECK’s sound is reminscent of early Incubus and Oasis, and after a few listens, it’s tough to get songs like “Looking Back” and “Moonbeams” out of your mind.

And would this post be true to BWLB if I didn’t mention how hot the guys in the band are?? Ok I’m gonna be more specific. The two guys (Takeru Sato and Aoi Nakamura) who played the high school kids didn’t really do it for me, but the senpai?? Yum! Hiro Mizushima plays the tortured, but genius musician, who’s bullet-holey guitar has a dangerous past. Mukai Osamu is BECK’s bassist and shirtless voice of reason, and Kenta Kiritani is incredibly convincing as Beck’s loose canon loud-mouth frontman.

There is much, much more to say about this film but I will spare you. I’m sure at least half of you are interested enough to find out more about “BECK” yourselves. But the moral of this post? SEE THE MOVIE!

Want to be totally connected to us and in the know? Follow BWLB on Twitter at blackwomenloveb and KrisE at: K_Kisses_KrisE